Although the Meyoung TC80 LED Mini Projector doesn’t include all the adapters or ports you may want or need, it’s a good backyard projector for family movie night – especially for the price.

Why the Meyoung TC80 LED Mini Projector may be one of the best backyard projectors for its price.

It used to be that video projectors were only used for presentations at offices or conferences. Part of the reason for that is because projectors weren’t terribly affordable. As technology has improved, though, the prices have come down, and now putting a projector in your backyard to screen movies for family and friends has become a regular thing. The Meyoung TC80 LED Mini Projector can turn your garage door, a wall of your home, or a big white sheet into an outdoor home theater. This projector is small enough to fit in a backpack, and it includes universal connection ports, which makes it versatile.

The Meyoung TC80 could be precisely what you need for all your media. To really get a good idea of what you’re getting with this portable backyard projector, read through the details of what it can do.

Although this is a simply built piece of electronic equipment, the Meyoung TC80 LED Mini Projector works well for its intended purpose. The small size of this backyard projector makes it easy for you to slip into a backpack and take with you for an outdoor movie screening. It also only weighs about 2 pounds, so it isn’t too heavy. The lens is made up of LEDs, which display at a native 800×480 resolution. The Meyoung TC80 is capable of supporting 1080p media, but don’t expect the same quality as a projector that has native 1080p support. You can also buy an HDMI adapter to hook up laptops and video game consoles. In fact, it’s compatible with many different gadgets, including flash drives, smartphones, DVD players, and more. You just need to make sure you have the right cables, which are not included.

“…needs to be at least 4 feet away from the surface it’s displaying onto and up to 13 feet away.”

The LEDs should be long-lasting and give you up to 1200 lumens. While that amount of light is bright, it isn’t appropriate for daytime use. To get a larger picture – up to a 130-inch screen – you simply need to pull the projector back farther. The projector needs to be at least 4 feet away from the surface it’s displaying onto and up to 13 feet away. Keep in mind that the farther you move the projector away from the display surface, the larger the pixels will appear, and the quality of the image will drop. You get a remote control with this projector, also, which makes it easy to make different selections for display options, media, and more. The projector and remote work because of an IR receiver, but the projector doesn’t always pick up the signal. The good news is that if you have issues with your remote, customer support is typically quick to send a new one.

SAFETY & DURABILITY | Lightweight, but Not Cheap

This Meyoung TC80 LED Mini Projector is solidly built in a lightweight frame, and instructions are easy enough to follow. If you have any questions or issues with this backyard projector, customer support is readily available and responds to emails quickly. The focus ring is tightly screwed onto this projector, so you shouldn’t have to worry about parts falling off.

The only issue seems to be with the power connector, which can sometimes fall inside the projector, making it hard to reach. It can also mess up the video quality when this happens. Other than that, it’s a solid projector that doesn’t seem as though it’s cheaply made. 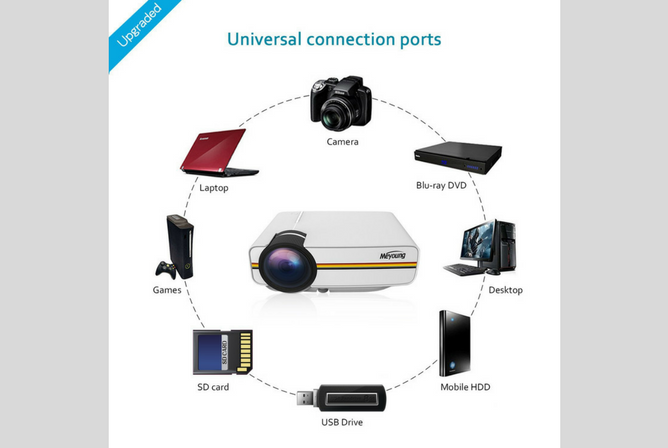 If your goal is to show a movie – indoors or outdoors – at night, this Meyoung TC80 LED Mini Projector could be a good choice for you. It’s important for you to choose this projector if you only plan to use it in absolute darkness because the 1200 lumens aren’t bright enough to display anything well enough during the day or indoors where light can interfere with the display. Although this is a smaller projector and meant to be a portable device, it does have the bits necessary for mounting it on a ceiling. It also includes a built-in speaker that works well enough, but if you’re looking for great audio quality, you’ll want to use a separate speaker. For an audience of two or so, you’d probably be fine using the onboard speaker, but if you have a bigger audience, a speaker system may be necessary.

The Meyoung TC80 doesn’t support Bluetooth or Wi-Fi, but if you have the proper cables and adapters, you can use the Wi-Fi on your device that does support it to stream movies and shows. For example, you can use this with a Fire Stick by simply plugging it into the HDMI port, and a power source. This projector supports the most common video formats, so you should be able to play any media you want to through this device. The quality of the video is decent, but not the best. It often depicts a blurry display, but you may be able to get a better image after adjusting the focus ring. You could also forgo using the presets on the projector and set it up with the resolution and options you prefer. This isn’t the best quality, though, and there’s a good reason for that. 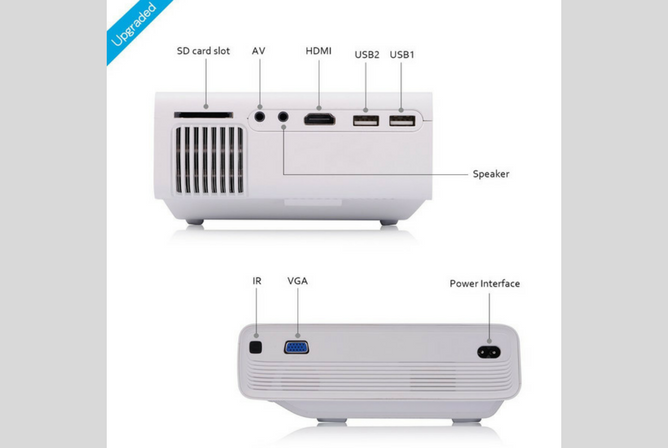 If anything, the Meyoung TC80 LED Mini Projector is a budget-friendly miniature projector that will work well for showing movies outside in your back yard. The LEDs are bright enough to show a decent picture in very low lighting, but they’re not bright enough to work well with much ambient light. Although the LEDs are rated for 30,000 hours of life, there’s a chance that your lens could burn out early.

At a MSRP of $169.00 for this projector, you can’t expect miracles from it. If you’re looking for a fun way to show kids a TV show or a movie at an affordable price, this could be a good choice. Considering the price, if you have any issues with it, the warranty may not be worth the trouble. If you get a couple months out of this, you’re getting your money’s worth. With that said, many people who have used this projector have had it last for a year or longer. 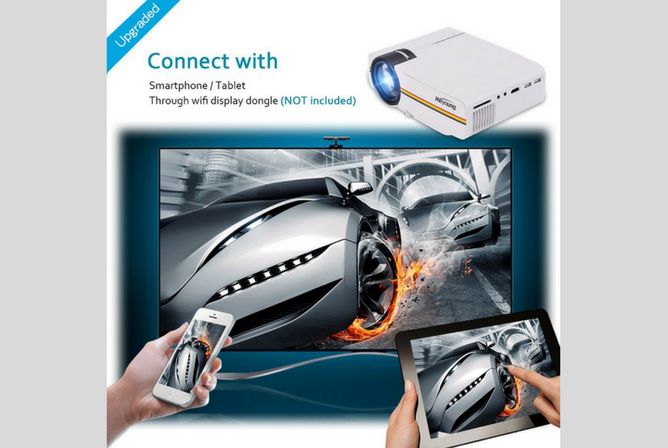 THE BOTTOM LINE | A Good Choice for Backyard Fun

If you’re concerned about cost, the Meyoung TC80 LED Mini Projector might be your best bet. It’s one of the most affordable choices on the market, and it does exactly what it says it will. The built-in speaker isn’t the best, but it’s suitable for a small movie screening or video game session. This projector requires almost complete darkness to work well. You can play almost any kind of media through this projector, as long as you have the right adapters and cables. That may be the biggest downside of this projector – to hook up your laptop, PC, or a video game console, you’ll have to purchase an HDMI adapter and cable separately. For backyard family movie night, though, the Meyoung TC80 LED Mini Projector is a bargain, and a good projector to have on hand. For more options, read our Best Backyard Projectors here.
DISCLOSURE: We research each product thoroughly and give unbiased ratings of only the very best products, however we can only stay afloat through compensation we receive from our affiliate partners. Please see our full Affiliate Disclosure page for details. 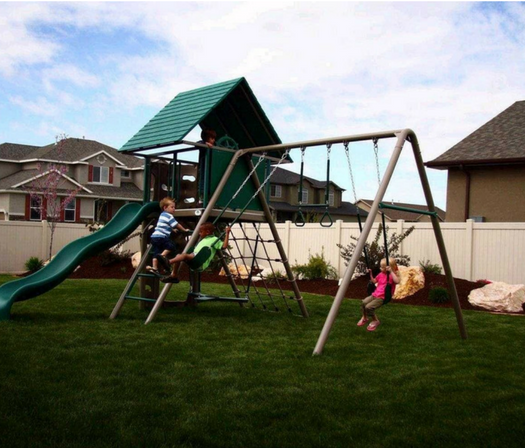 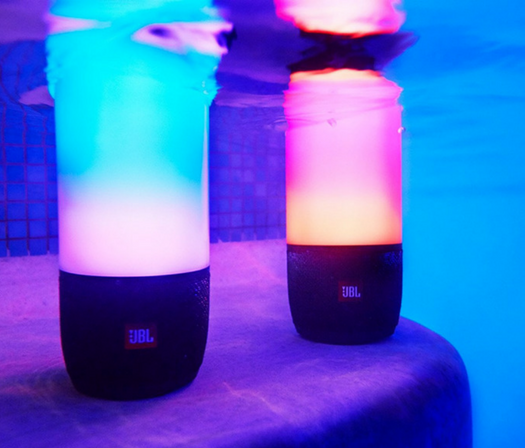