Technically, there’s not really projector made strictly for outdoor use yet, but in the meantime, you can find plenty of projectors that are quite suitable to use as backyard projectors. These units make it possible for you to plug in various media devices, such as your PC, laptop, tablet, even your smartphone or a streaming stick, and then watch all of your favorite TV shows and movies on a giant screen. It’s a great way to get some fresh air outdoors, but still enjoy football season, summer blockbusters, and more. Let’s take a look at some of the best backyard projectors that are available right now. 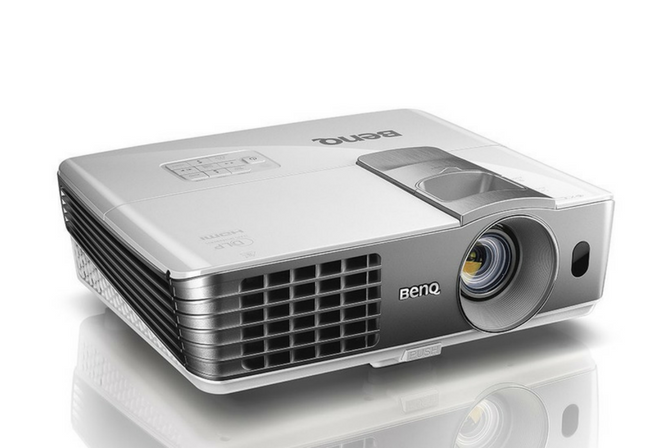 Although the BenQ DLP HD 1080p Projector (W1070) comes with the heftiest price tag, it’s the best backyard projector on this list if you take into account its feature set, image quality, and ease of use. The throw distance of this projector is modest, but that’s a good thing if you’re considering putting this up in an indoor space. The shorter the throw distance, the bigger screen you’re likely to get for the distance. If you have a 100-inch screen to fill, but less than 10 feet to work with, you want a projector with a shorter throw distance. Just taking image quality into account, you can’t get much better in a mid-range priced projector than this one. The blacks on the screen are richer, almost velvety, and the colors pop. However, it’s low on lumens at only 2000, so you’ll need to make sure you’re using this in a dark spot. Plus, the unit has a little bit of light leakage, but that’s easily solved with a little piece of cardboard or a box for the projector. It has an MSRP of 699.99, but be sure to check the current BenQ DLP HD 1080p Projector – Amazon price here. 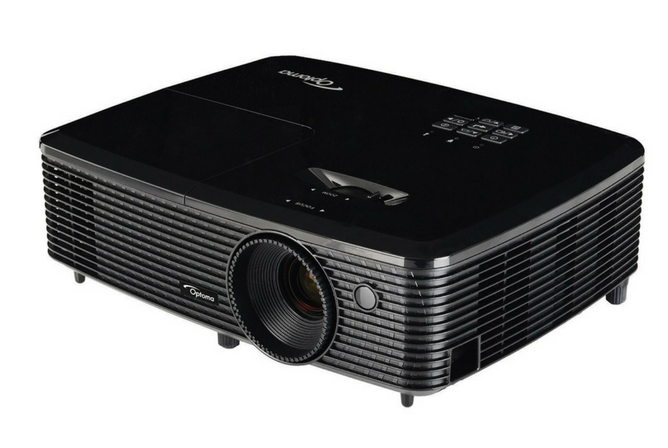 If you need a backyard projector that is smartly built with a remote control or on-unit menu changes in mind, this could be your best bet. The Optoma HD142X 1080p 3000 Lumens 3D DLP Home Theater Projector includes buttons on the unit, which makes it easy for you to make changes on the fly while you’re setting up the projector, or if you happen to be close to it while it’s in operation. The remote control lets you do even more, and it has backlit buttons, so it’s easy to see which buttons you’re pressing as you use it. The performance of this DLP projector is impressive and it projects a great looking image with high resolution. However, if you’re sensitive to the rainbow effect, you might want to look at another projector. The rainbow effect may not bother you at all, and if you can’t see it already, don’t go looking for it. This backyard projector has a long-lasting bulb that is rated for upwards of 8,000 hours if you choose the power-saving mode. It has an MSRP of $999.00, but be sure to check the current Optoma HD142X 1080p 3000 Lumens 3D DLP Home Theater Projector – Amazon price here. 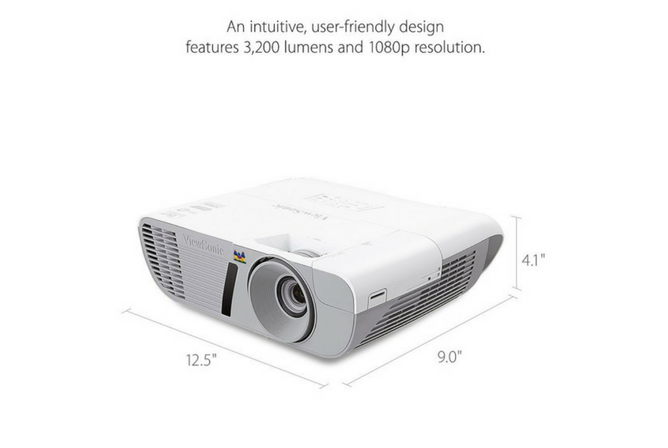 When you’re searching for an outdoor home movie theater projector, you might only know that you want one that’s easy to get started straight out of the box. The ViewSonic PJD7828HDL 3200 Lumens 1080p HDMI Home Theater Projector fits that description ideally. As soon as you get it plugged in and running, you can set up the projector and its options quickly and easily. The remote control is intuitive to use, and you’ll soon have it ready to go. You’re likely to be impressed by the lumens of this projector – at 3200, it’s the brightest of the bunch. This means that you can screen a movie, TV show, or sports event and not have much of an issue if there’s a bit of ambient light. Movie times can start sooner with a projector like this one. For the quality that you’re getting with this projector, it’s an affordable investment for someone who loves their entertainment. It has an MSRP of $589.99, but be sure to check the current ViewSonic PJD7828HDL 3200 Lumens 1080p HDMI Home Theater Projector – Amazon price here.

Upon first glance at the specifications for the Epson Home Cinema 1040 1080p Home Theater Projector, you may think you’re looking in the wrong category. It seems as though this projector was meant for office presentations, church gatherings, or conferences. While it is a good option for that because of the high lumens (3000), it’s also a great choice as a backyard projector, making this one of the most versatile choices. Ambient light doesn’t affect the quality of the picture, and you get a true 1080p resolution. Plus, with the 3LCD technology, you won’t have to worry about the rainbow effect at all. You’ll be able to digitally correct distortion, which is a plus, but this unit doesn’t include any physical lens shift, so you may be stuck with an imbalanced image if you mount this in a room that isn’t quite the right size for the projection. It has an MSRP of $799.99, but be sure to check the current Epson Home Cinema 1040 1080p Home Theater Projector – Amazon price here. 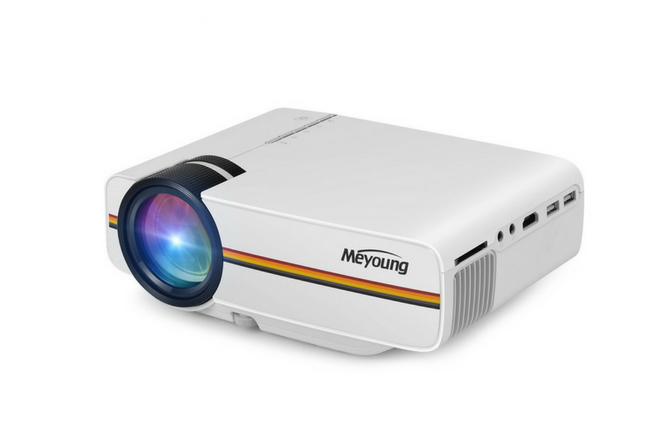 The Meyoung TC80 LED Mini Projector combines a variety of newer technologies to make owning a projector easy for almost anyone. The price of this tiny portable projector is far from expensive, but you’ll have to compromise a bit on quality for affordability. You can easily slip this into a backpack and carry it with you to a friend’s house or with you when you go camping. As long as you have a power source and a blank wall or a screen for the image, you’re good to go. The unit is versatile in that you can use it indoors or outdoors, and it can handle almost any device you want to hook up to it. However, HDMI ports are not included on this projector, so you’ll have to buy an adapter. The quality of the picture is all right, but it’s not excellent. It doesn’t include native 1080p, so you can’t expect the highest resolution, clearest picture, or brightest colors. For the price, though, this is an excellent choice if you want to give your kids a chance to watch a movie in the great outdoors. It has an MSRP of $169.00, but be sure to check the current Meyoung TC80 LED Mini Projector – Amazon price here.

Finding the right backyard projector for you is about finding the right balance of options, features, price, and quality. Many projectors are overpriced for some people who just want to play cartoons on a big screen in the backyard for children, while others are just the bare bones and don’t have enough features for them to show off videos, presentations, and more. Of these projectors listed, any of them could be the perfect fit for your backyard! And if you’re looking for more cool gadgets to amp up your backyard hangout, check out our Best Outdoor Bluetooth Speakers right here!

DISCLOSURE: We research each product thoroughly and give unbiased ratings of only the very best products, however we can only stay afloat through compensation we receive from our affiliate partners. Please see our full Affiliate Disclosure page for details. 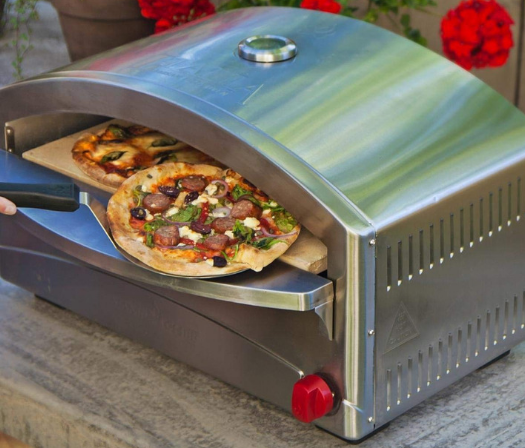 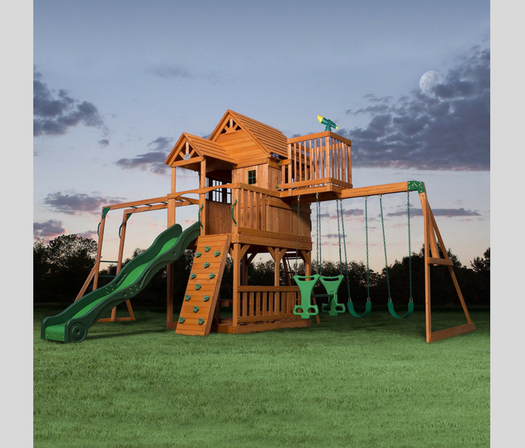